A Dishwasher that "Technically" Works


Have you ever had an appliance that didn't quite work right? I had an experience once with a dishwasher that just didn't clean very well. It seemed to work. It went through all the cycles. Things got pretty clean. But sometimes dishes had to go through twice and glasses only got really clean when placed in certain locations.

So I called the repair shop and they sent someone out. He poked and prodded, opened up the insides, and generally gave it a once-over. He even checked the motherboard (they have motherboards, apparently). Everything was fine. 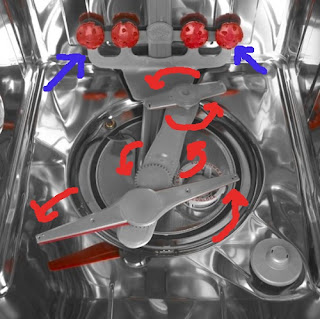 "Everything is working," he told me. "I can't fix it because nothing's wrong."

Nothing is "technically" wrong. But something is wrong.

Okay. Now we're getting somewhere. The machine works. It works as well as it can. Nothing doesn't work - technically. It's just not performing as well as I'd like, or as well as I know a dishwasher CAN perform.

Maybe I can make this old machine work better, but it would involve replacing every part - even though it's not broken - with a brand new part. And if I spend enough money, I can probably get that old dishwasher to work 80% as well as it did when it was new.

But it will never be as good as a new machine, even if I spend more money than it costs to get a new machine.


Your computers are similar to this.

When a computer gets to be old, there's a limit to how well it can work. The hard drive is old. The fans are old. The chip sets are old. The operating system is old.

Even when a computer "works" technically, that doesn't mean it works well or that you should expect it to be as fast as when it was new. Yes: It boots up. The lights come on. The hard drive spins. The screen works. The keyboard works. It "works" - as well as it can.

Today a good business computer can be had in the range of $800-$1,000 with gargantuan hard drives. If you need more, you can certainly spend twice that. But most businesses run Word, Excel, Outlook and a web browser. You probably don't need a monster machine.

I'm sorry you paid a bunch of money for your old computer, but it's no different than a car. A ten year old car is still ten years old, no matter how much you care for it. You can love it and care for it, but it will still be a little more rattly and a little more dusty than when it was new.

Bottom Line: You need to buy new computers from time to time. We recommend every three years. I can get by with four. But five years is too long. A five year old computer is three generations old. The rest of the world has moved on and you are far less productive if you're still using that old computer just because the light still comes on.