This might sound silly at first, but it's not. If you're not an IT Professional, you may be plugging some things in wrong - costing yourself money.

Please note: I am not suggesting that non-I.T. can't do the stuff I talk about here. But we see clients doing certain things over and over. So we know that these problems are out there and we know to keep an eye out for them.

There are three primary areas where things get "plugged in" incorrectly: 1) Things plugged into the wrong slot on PCs/Servers; 2) Network cables and equipment; 3) Electrical.

There are lots of places to plug things into your laptop, desktop, or server. And as odd as it sounds, sometimes things fit into slots even though they shouldn't be plugged in there. This is totally the fault of the hardware manufacturers and the industry standards. Even if you're not an I.T. pro you might be amazed at how many interfaces we've created that can use wrong!

The biggest current example is the USB slot. If you have really old computers, they might have USB 1.1 slots. Those devices transfer data at 12 Megabits per second. That's slow!

Most computers today have both USB 2.0 and USB 3.0 slots. USB 2.0 transfers data at about 480 MBits/second. Obviously, a hard drive plugged into this slot is going to be a lot faster than a 1.0 slot. On older machines, with USB slots in both the front and back of the computer, the slots in the front were normally 1.0 while the slots in the back were 2.0. I have no idea why this is, but some devices will only work if plugged into the back of the machine!

USB 3.0 can operate at 5,120 MBits/second (5GB). That's a LOT more than the 2.0 generation. But you need really good cables for this. You can't plug in old cheap cables and get that kind of speed. But wait! there's more.

The USB 3.0 slot will not work until an operating system is loaded. So, for example, if you plug a keyboard into the 3.0 slot and you need to press a key during boot-up, you won't be able to . . . because the operating system hasn't loaded yet. Only the 2.0 devices will work at that point. So things like keyboards and battery backups need to be plugged into the 2.0 slots.

The most common problem we find with networks that we come across is that they are operating a LOT slower than they could be. Sometimes this is because one piece of equipment needs to be faster. But very often it's because things are just plugged into the wrong places.

Again, the standard network interface plugs in the same no matter how fast or slow the wiring is. The jack is called an RJ-45 and it looks like a telephone jack, only a bit bigger. If you have the right equipment and the right cables, this might operating at 10 MB per second, 100 MP per second, or 1,000 MB per second (1 GB).

Please take a look at this diagram. Don't worry, we won't get too technical. Just remember: Every device and every cable in this diagram might operate at a different speed. 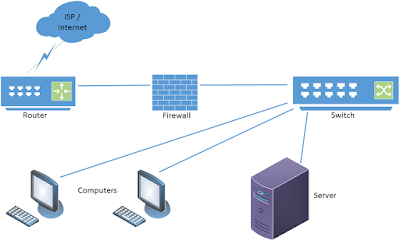 Because bandwidth has exploded from 128K lines to 1 MB, 10 MB, and 100 MB, the world is filled with old equipment that just can't take advantage of the faster speeds! Most desktop PCs and servers have 1 GB network cards. That means that they can move (theoretically) ten times faster than a two year old 100 MB switch.

Also, many devices have one or two really fast ports and the rest operate a little slower. So you might have a 1 GB port on your firewall. But if the network cable is plugged into a slower port, then you're not using all the bandwidth you could. The same is true on the switch, the server, etc. You might be able to get MUCH faster speeds by simply plugging things into different ports!

Electrical issues are a little different. For the most part, plugging things into the wrong place won't cost you any extra money. It just reduces safety and the security of data. There are two common ways that things are plugged in "wrong."

First, some things are just not safe. UPS battery backups should not be chained together. It's unsafe at a minimum - and it's a fire hazard. The same goes for power strips, extension cords, etc. This is one I know you know. But we see it all the time.

Another unsafe configuration we see is to have fans and heaters plugged into UPS battery backups. Those things should be plugged into the wall directly. The UPSs are not rated for heaters or spinning motors. This is a true, imminently dangerous thing to do.

You should also never plug a laser printer into a normal UPS battery backup. There are industrial strength UPSs designed for printers but unless your printers are mission critical during a power outage, you probably haven't bought one of these.

Second, we see a lot of things plugged into the wrong outlets on the UPS. Very often, the UPS battery backup will have two sets of outlet. One set is just a surge protector. Things you plug in here will go OFF when the electricity goes out. So it's okay to plug your speakers and electric stapler in here, but not you computer and monitor.

The other set of outlets have surge protection plus battery power. So they will stay ON when the electricity goes you. You should plug you PC and Monitor into these - and nothing else!!! This will maximize the up-time you will experience should the lights actually go out.


Again, I don't want this to come across as arrogant. These things seem simple enough. You can plug things in and make them "work." But that's not the same as having them work as well as they could.

I have a theory I call The Paradox of Simplicity. The Paradox of Simplicity is this: Technology becomes easier over time until the non-expert can perform the technical task well enough to get by, but not well enough to rely on for business purposes. For example, I can buy Adobe Photoshop and make "OKAY" graphics. But I'm not a graphics pro and never will be, no matter how good the tool is.

Things are easy "enough" that anyone can make a computer work, make a network connect, or plug in the equipment. But the result might not be as fast, secure, and safe as it could be. You've all heard the saying: Good enough isn't.

It's just one more reason why you should rely on a successful network professional to help you set up and maintain your office!