Windows XP: Do Not Resuscitate

I am writing a book and working on a chapter about "Nuking and Paving" desktop computers. That's when you totally flatten a computer and rebuild from scratch. This may be done for a variety of reasons, including some super nasty virus attacks. 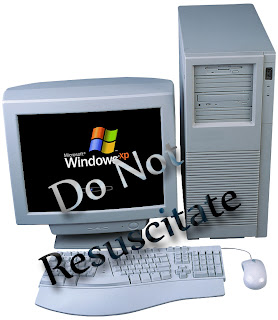 One of the important decisions you need to make is whether the computer is worth the effort. On more than one occasion we've had a client say: "I don't want to spend more than a couple hundred dollars to fix that machine."

Think about the machines in your office. Some are new and mission critical. They are obviously worth some time (and money) to rebuild. But others are old and crappy and barely do what they're supposed to do.

This is a financial decision, not a technical decision. If you have an old, slow PC running an old operating system, and it has a monster virus, you probably won't spend ten hours of labor trying to fix it. Your computer consultant can't work for free and you don't want to pay $1,500 to fix a ten year old computer.

For the average "old piece of junk" computer, nuking and paving can take 3-4 hours. But if you have a really old operating system like Windows XP, the updates and security patches can take another 3-4 hours. Let's say you pay $150/hour for tech support. Six to eight hours is $900 - $1,200. A new business class computer computer will cost you about $900 - $1,000.

Remember: A machine that's three years old is about half the speed of a new machine. Another three years older and it's half of that. So downloading and updating can become extremely expensive just because the machine is so slow. Most Windows XP machines are very old. Yes they work. But rebuilding them can take five times as long as a one year old computer.

It’s very important that you have this discussion with your computer tech before the machine dies (or is infected). It can be hard to make this decision at the last minute. It's much easier if you can just draft a policy and execute when the time comes.

Think about it like a "Do Not Resuscitate" order for terminally ill patients.

Go through your office and look at each computer. How much would you be willing to spend on each machine? If the answer is "nothing" or very little, then just put a DNR label on that machine. Then, if something happens, you don't have to make a decision. You just have to execute the decision you've already made.

Decisions made before the disaster are often more rational and can be a good starting point when there IS a problem.

Compare this to repairing an old car. Very often old computer repairs look simple. You commit to $500. Then something else goes wrong. You need to update this software program. And now the price goes up. That old network card doesn't have drivers. So the price goes up again. Your $500 job is now a $750 job. Did you mean to spend that much?

An easy way to avoid this is to simply post DNR notices on the oldest machines.